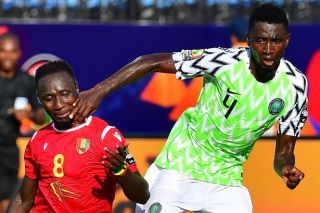 Some Manchester United fans have been drawing up their own wishlist for the transfer window. We don’t require football scouts like most managers because we don’t need them.

Usually a quick 10 minute match on FIFA will tell you everything you need to know about player. Maybe a YouTube video or two to go along with it.

Jokes aside, United fans appear to like the look of Leicester City midfielder Wilfried Ndidi, who has been on receiving end of transfer pleas on Twitter.

READ NEXT: Man Utd prepare move for La Liga defender after missing out on De Ligt

He has been in action for Nigeria at the African Cup of Nations and on Wednesday they beat Guinea 1-0.

Ndidi could be seen as an adequate replacement for Ander Herrera – it helps that he has Premier League experience, so if a move was made he shouldn’t take very long to adjust himself.

Moreover, the Red Devils need at least two midfield signings this summer but have yet to announce one.

When asked about United’s alleged interest two weeks ago, Ndidi told Goal: “I am flattered when hearing such a thing.

“It is very good to hear about that interest from big clubs, but there is nothing on the ground so I won’t care about it.”

Last season Ndidi played every league game for The Foxes.

Ndidi took to Twitter after last night’s win in the AFCON and United fans were quick to respond.

Come to Manchester united, we need your humble service.

please push a move to my club pls @ManUtd
.Dalu

Massive performance tonight
You’re going to Manchester united, you’re underrated in the EPL…
Too good to play for Leicester City as well
💪