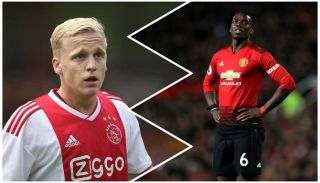 Dutch newspaper Telegraaf ran a report on Thursday claiming that Real Madrid have made contact with Ajax to discuss a potential transfer for Donny van de Beek.

Earlier in the week, Marca suggested that the La Liga giants could turn to the 22-year-old if attempts to sign Manchester United midfielder Paul Pogba prove too difficult.

Marca’s report stated the following: While working on the transfer of Paul Pogba from Manchester United, Real Madrid will stay attentive to the situation surrounding Donny van de Beek at Ajax, with the 22-year-old still on their radar as a ‘Plan B’.

The question now is does today’s report in Telegraaf give a sign that Real Madrid may have already given up hope of landing Pogba this summer?

And, if Los Blancos do end their pursuit of Pogba, does that mean he will spend at least one more season at Old Trafford? A return to Juventus could also be on the cards.

Dutch journalist Marcel van der Kraan is a regular on talkSPORT and he previously revealed that Van de Beek is looking to sign for either United or Tottenham, preferring a move to the Premier League over Spain.

Another brilliant talent could be heading to the Premier League 🙌 pic.twitter.com/DhU2LvVAtQ

We have heard nothing to suggest United are trying to strike a deal for the young Ajax star, but we decided to focus more on the Pogba angle to this story.

Zinedine Zidane is said to want the French midfielder at the Santiago Bernabeu next season.

Pogba doesn’t look like someone who is happy with his current situation Ole Gunnar Solskjaer must now ask himself it’s worth keeping someone around in that state of mind.