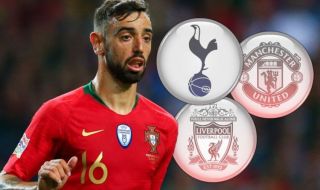 The Bruno Fernandes transfer saga continues to drag on with yet more speculation about the player leaning towards a move to the Premier League.

Correio da Manhã and Record both ran quotes from Sporting Lisbon manager Marcelo Keizer, who apparently said “it will be hard for Bruno to stay” and that he could lose a star player ahead of next season.

Of course it will be difficult for Sporting to fend off interest from the Premier League, but it’s a great opportunity for the playmaker who had a terrific season last term.

Moreover, Record states that United are currently leading the race for Fernandes, despite the fact we’re still seeking news of an official bid.

But United are crying out for more creativity from midfield and a player like Fernandes will definitely be needed if Paul Pogba decides to leave this summer. If he stays, it could open Solskjaer up to trying something different in midfield and nobody will care as long as it works!

Jornal de Noticias has reported a new approach from Champions League winners Liverpool which could be a move to make United and Spurs act quicker, but why do we need to be forced to make an offer? Someone tell Ed Woodward that pre-season preparations begin on July 1st.

Another report coming out of Portugal stemps from A Bola – confidently stating that a Premier League switch could be completed soon. United will hope that’s the case if he joins them because Solskjaer needs to have most of his players available to him from next week to properly prepare for the new season.

It sounds like United and Spurs are still battling it out for Fernandes while Liverpool loom in the background. Things can change very quickly but I fancy the Reds to get a deal done soon.