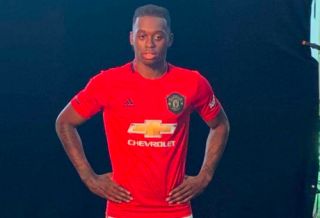 Photos have emerged on twitter of Aaron Wan-Bissaka in a Manchester United shirt as we await an announcement on his impending move from Crystal Palace.

These are not official photos from the club so cannot be confirmed as legitimate, but it looks pretty clear that Wan-Bissaka is photographed in the pictures below.

Wan-Bissaka’s signing is now football’s worst kept secret after photos emerged last night of the youngster pictured in the Lowry ready to complete the first part of his medical.

BBC Sport revealed that the England U21 international is set to join the Reds for a £50m fee, and is set to earn up to £80,000 per-week in his first contract at the club.

We cannot wait to see Wan-Bissaka stepping out onto the pitch in a red shirt next season.

Expect an announcement from the club imminently and plenty more images of the youngster showing off his new strip.