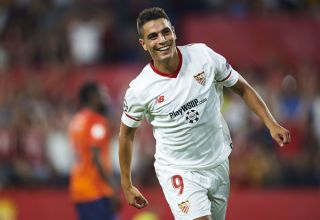 Sevilla striker Wissam Ben Yedder is said to be also attracting attention from Paris Saint-Germain and Barcelona, as well as Manchester United.

The Red Devils could do with signing a new centre-forward this season because Marcus Rashford is not ready for the responsibility of leading United’s strike force into next season.

Speculation over Romelu Lukaku’s future is widespread with the Belgium international edging closer to joining Serie A giants Inter Milan, as reported by The Sun.

It will come as no surprise to the Spanish media that French striker Ben Yedder is a wanted man this summer after his return last season (30 goals and 11 assists in 54 games).

He also opened himself up to a move when speaking recently on international duty with the France national side, saying (via Football Espana): “I dream of playing at the highest level, in the biggest clubs in the world and can be next to world class players. To see how far I can go. It is the opportune moment, as it is said; I feel it like that.”

According to ABC de Sevilla, via France Football, United are best placed to take over the services of the France international. They reference the likelihood of Lukaku’s exit to suggest Ben Yedder is seen by the Reds as a potential replacement for the striker.

The 28-year-old is said to have a £35.9m release clause which isn’t a bad fee to pay for a forward with his numbers last term.

Moreover, Ben Yedder has previous with United having come on as a substitute and scored a brace inside four minutes at Old Trafford in 2017 to knock us out of the Champions League.

I don’t think we will make a move for a striker until Lukaku officially leaves, but that could put United in an awkward negotiation stance with other clubs aware of our financial power and need for a goalscorer.