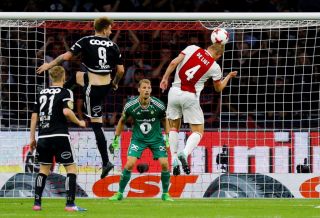 We have two reliable journalists here with slightly contrasting reports.

BBC Sport’s David Ornstein has heard that only United have made an offer for Ajax skipper Matthijs de Ligt, whereas the reliable Fabrizio Romano of The Guardian says a deal is all but done with Italian giants Juventus.

The 19-year-old centre-back has also been strongly linked with a move to Barcelona this summer, as well as Liverpool, though it still appears that he could end up anywhere.

De Ligt has emerged as one of the hottest prospects in world football after a tremendous campaign with Ajax, which saw the Dutch outfit reach the semi-finals of the Champions League with an exciting young squad.

A lot of promising players at Ajax are now considered targets for some of the biggest clubs in the world, with Frenkie de Jong being the first to leave for Barcelona midway through the last season. He remained in Amsterdam until the summer.

We are all hoping soon that De Ligt will make a decision on his future because the saga is really dragging on at this point.

United no longer seem to be in the running – with reports slowly dying out each day – though Ornstein claims there is still a possibility of De Ligt joining United.

Romano, on the other hand, says De Ligt has chosen Juventus as his next club and will earn €12m-a-year until 2024.

The only offer on Matthijs de Ligt’s table at the moment is from #MUFC but the player does not want to go there, says @bbcsport_david