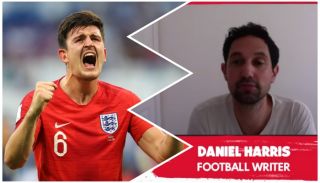 Manchester United fan and sports journalist Daniel Harris appeared on Off The Ball to discuss the imminent signing of Aaron Wan-Bissaka, needing more signings if progression is to be made under Ole Gunnar Solskjaer, and the crazy asking price for Leicester City defender Harry Maguire.

“I think Wan-Bissaka is an excellent signing,” Harris said during Thursday’s OTB AM show, “and if you’d said to me that United are going to buy a right-back, this is who I’d want it to be.

“But, he’s not going to transform things.”

Still a Crystal Palace player as of now, Wan-Bissaka is today finishing the final part of his medical before completing his transfer. He will then become United’s second summer signing after acquiring Swansea City winger Daniel James.

Harris goes on to question the crazy demands Leicester City have made for Harry Maguire, who has been linked with United for the best part of a year now.

“The money being touted for Harry Maguire is absurd but it’s not really even about the money.

“United are rich and can comfortably afford to buy Harry Maguire, but if you were to pay £80m for a centre-back, they should be the best centre-back in the world.

“Maguire isn’t that, and it doesn’t matter how much he’s able to improve, he’s never going to be able to run fast or turn quickly.

“Those things will always get found out in the end.”

Now we wait to see who will follow Wan-Bissaka to United. Hopefully, a midfielder who will take the Reds to the next level.

Watch the full conversation with Harris below.