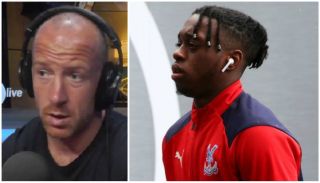 Aaron Wan-Bissaka is set to cost Manchester United around £50m which is a hefty sum for a 21-year-old full-back, on the back of one good season and without a single international cap.

But there’s no denying the nature of the transfer market dictares the prices so in hindsight, Wan-Bissaka could turn out to be a steal, just like Rio Ferdinand was when United broke the transfer record to sign the former England centre-back.

Everyone at United hopes Wan-Bissaka turns out the same way and he’s bound to make his England debut soon, with the move to United likely to add pressure to Three Lions boss Gareth Southgate.

“In eight or ten years time when Wan-Bissaka is still at United, everyone will be saying that was cheap. In the long-term if he stays there a long time, that’s cheap.”

Wan-Bissaka is at Carrington now for the final part of his medical.

Aaron Wan Bissaka has left his Manchester hotel and is on his way to Carrington for the second part of his Man Utd medical.