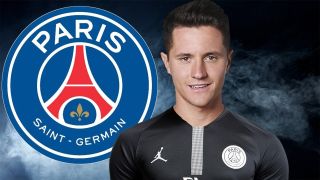 Ander Herrera will become a PSG player this week once his contract at Manchester United officially expires, according to French newspaper L’Equipe.

The club and player has already accepted that they’re about to go their separate ways but the Red Devils have yet to sign a replacement in midfield.

And, Ole Gunnar Solskjaer is under pressure to bring in at least two midfield additions, especially if Paul Pogba leaves which will be a possibility for as long as the transfer window is open.

The report from L’Equipe says Herrera will be announced along with Sevilla’s Pablo Sarabia.

PSG will be expected to win Ligue 1 again next season, but you always feel their signings are made in a bid towards doing better each season in the Champions League. Herrera and Sarabia won’t make much of a difference to that – but it’s early days and nobody knows what will happen with Neymar.

The French champions reportedly offered Neymar to United, hoping the Reds would allow Pogba go the opposite way.

However, The Independent claims United rejected this offer – probably because they didn’t see the point in getting rid of one pain in the arse for another…

We wish Herrera the best in Paris.