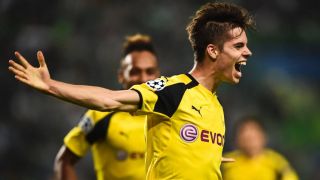 The return of Mats Hummels means the Bundesliga club have an opportunity to cash in on the player.

Manchester United should be all over Julian Weigl with news emerging that Borussia Dortmund are willing to sell the midfielder.

Dortmund apparently value the 23-year-old at around £27.m, which has been deemed ‘affordable for the Gunners’ with Unai Emery reportedly keen on signing Weigl, as reported by The Mirror.

Weigl is set to fall down the pecking order due to BVB’s recent capture of Hummels from Bayern Munich, but he’s a midfielder and should be looking to join a club where he will get opportunities there rather than being shoehorned into defence.

With previous links to Barcelona, Weigl has technical ability in abundance and is the closest thing to Michael Carrick in the current market. His versatility could go a long way towards helping Ole Gunnar Solskjaer and his big task at hand which is rebuilding the Manchester United squad.

PSG are also said to be interested in signing the Germany international, so there will be competition from near and far for Weigl’s signature.