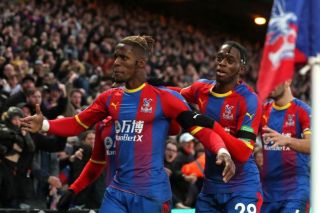 BBC Sport reported earlier today that a £50m fee had been agreed with Crystal Palace for the young defender, who is set to earn £80,000 a week in wages.

Wan-Bissaka is expected to have a medical at United’s AON training complex in the coming days before officially being announced as Ole Gunnar Solskjaer’s second summer signing, following Daniel James’ switch from Swansea.

Former red Wilfred Zaha, who reportedly favours a switch to Arsenal this summer, has been heard in a video on twitter heaping praise on Wan-Bissaka.

Zaha credits Wan-Bissaka for his humility in the Crystal Palace team, and getting the job done defensively.

United are getting an excellent defender in Wan-Bissaka with huge potential to grow into one of the world’s best full-backs.

See what Zaha had to say below:

Zaha on Wan-Bissaka: “Unless you speak to him, he will not say a word. He does his speaking on the pitch. That’s why everyone likes him. He doesn’t chirp up much. He just comes in, does what he has to do, plays his game, plays well and goes home.” #mufc pic.twitter.com/NkRlu2xO9u