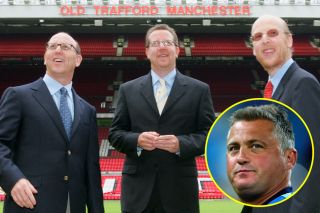 The Glazers have hardly reduced the debut since their controversial takeover in 2005.

When you look at the recent successes of Liverpool and Manchester City and consider the fact they don’t pay as many dividends as United do, it’s no wonder that it looks like we keep falling behind.

We don’t need a sugar daddy to throw billions of their money into the club, although that would be a lot better than the current regime. United could compete with the very best using its own money – if it was freed up and not sent directly in the pockets of Malcolm Glazer’s offspring.

Darren Gough was on talkSPORT explaining the maths behind the Glazers’ reign: “The debt is £500m, there’s been no capital paid off it since 2011. Only interest is being paid off. Now the interest is £786m. Share sales have brought in £452m, none of it has been invested in Man Utd. That goes… you know where it goes, to the owners of the football club.

“Dividends [money paid to shareholders], there’s been £78m dividends since 2013. Liverpool and Man City do not pay their owners dividends. £78m is a lot of money. Director’s fees [how much Ed Woodward and Matt Judge have earned], work that one out, £75m as well.

“They’re still a financial powerhouse and if you think when the owners of Man City came they’ve pumped £1bn in. In the same time, the Glazers have taken £1bn.”

A lot of what Gough says has been summerised in the powerful graphic below, tweeted by Red News editor Barney Chilton.

This isn’t about transfers, form. I love Utd, I want them to win everything next season, never want us to fail. But I have been #GlazersOut since 2005 because of the damage they have done taking money out rather than putting it in. In case you missed this last week, this is why. pic.twitter.com/XOK2aiA9nF

For fans, it’s disheartening to see some you love change due to greed. They’ve sucked the football out of MUFC for commercial growth and we’re really starting to feel it now.