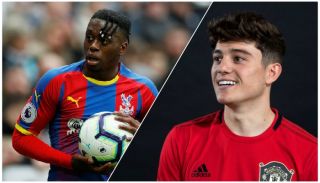 Manchester United could have two deals completed before July if Aaron Wan-Bissaka completes his transfer from Crystal Palace this week.

The first deal completed by the Reds this summer saw Wales winger leave Swansea City for the 20-times champions of England — a move made with Ryan Giggs’ nod of approval.

Fans have been understandably frustrated by United’s lack of activity in the transfer window up until this point, but as Manchester Evening News reporter Rich Fay points out, none of the other top six contenders in the Premier League have announced a single signing yet.

Chelsea have a transfer ban but the other clubs have no excuse. It puts our impatience into perspective.

The Wan-Bissaka deal is playing out because lower teams in the Premier League no longer rely on transfer fees to operate. There’s so much broadcasting revenue in the game now, making the once weak clubs a lot stronger financially.

Fay makes the point below in a tweet that United fans shouldn’t worry considering none of their rivals have done business yet. It suggests that we’re making ground on our rivals – but shouldn’t stop now… let’s continue by completing more deals!

Looks like Daniel James and Aaron Wan-Bisska both signed before July.

Fans understandably frustrated it has taken a while to get done, but remember no other ‘top six’ side has signed anyone yet.

United still need further improvement, but a promising start to the summer #mufc

The Red Devils are also strongly linked with a move for Sporting Lisbon midfielder Bruno Fernandes, with The Metro claiming his agent is in London today for talks with the club about a potential summer transfer.

Fernandes had a terrific season for Sporting and would be expected to have a big influence at United next season after scoring 28 goals in all competitions last term (via WhoScored) and impressed in Portugal’s triumph in the inaugural Nations League.