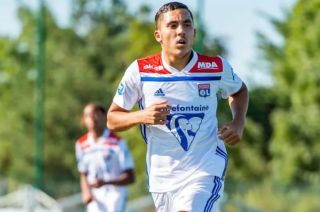 Manchester United are said to be giving serious thought to signing Lyon wonderkid Rayan Cherki, according to The Telegraph.

The 15-year-old became the youngest ever goalscorer in the U19 UEFA Youth League last season and has now become a target for some of the world’s biggest football clubs.

NEXT: Man Utd tell Leicester City they are willing to pay £65m for star player

This may appear a bit under the radar during a time we need first-team signings, but United should be looking to make moves like this every summer, ensuring we snap up the best young talents in Europe.

United have already dived into the youth market this summer with the signing of Ajax teenager Dillon Hoogewerf.

The Telegraph’s Sam Wallace claims “United would have to offer their biggest-ever contract to a scholarship-age player were they to convince Rayan Cherki to come to Manchester next season, first as a scholar and then with a guaranteed professional deal at 17.”

Why is this kid valued so highly you may be asking? Well, he’s obviously got tons of potential but it may also have something to do with the competition for his signature.

Cherki is attracting interest from European giants such as Real Madrid, Juventus, Barcelona and Bayern Munich.

It doesn’t get much bigger than that and he’s still just 15!

Moreover, Real Zaragoza have denied claims in The Sun that United have agreed a £600,000 move for winger Mateo Mejia. In a statement released on Tuesday, the Spanish club claimed no deal has been struck between the two clubs and player.

Time will tell on the Cherki front. We all want the best young talents at United.