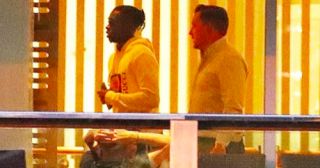 Aaron Wan-Bissaka has been pictured tonight at the Lowry hotel in Manchester as. he completes the finishing touches on his move to Man Utd.

Wan-Bissaka is finally set to become a Manchester United player, after discussions that have gone on for weeks with Crystal Palace.

BBC Sport reported earlier that the England u21 international is to join for a fee of £50m, and is expected to earn around £80,000 at Old Trafford.

Wan-Bissaka will be Solskjaer’s second signing of the summer following the move for Daniel James from Swansea. United fans should be excited by the signing who has huge potential to become one of the best right-backs in world football.

Let’s hope to see more names signing for the Reds at the Lowry in the coming weeks! Solskjaer still needs several new arrivals for the club to be able to challenge next year.