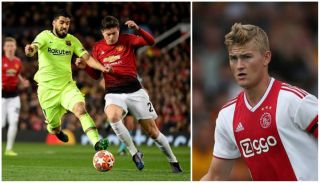 Barcelona — like United — are currently on the lookout for defensive reinforcements and have been heavily linked with Ajax sensation Matthijs de Ligt, who still has a decision to make on his future. The Red Devils looked like serious contenders for his signature at one stage, but now Paris Saint-Germain are set to go toe-to-toe with anyone for the Netherlands international, as per Paris United, cited by Barcelona blog Barca Blaugranes.

And according to Mundo Deportivo, Barca briefly turned their attention from De Ligt to Lindelof, which puts a spring in our step if anything.

The Catalan club apparently became frustrated with De Ligt’s agent, Mino Raiola, and opted to take an alternative route to finding the right defender for Ernesto Valverde’s side.

United are said to have rejected the approach by telling Barca ‘no thanks’ and opting to keep hold of the 24-year-old centre-back.

Lindelof had a solid season last term but knows he needs to build on that again if he’s going to make it as a top United defender, but it doesn’t help being partnered by mediocrity each week. Ole Gunnar Solskjaer owes him a good defensive signing this season and Sky Sports claims United are willing to spend £65m on Leicester City’s Harry Maguire.

Lindelof and Maguire? I’m not sure about the England international. I don’t think he’s of the highest quality and that’s what United should be aiming for.