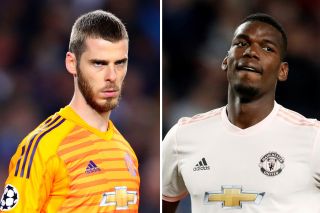 Pogba recently was heard stating his desires to leave Old Trafford this summer to ‘seek new challenges’. The French World Cup winner has been linked with a move to European giants Real Madrid and Juventus.

“One who probably has a deal sorted out with Inter Milan [Romelu Lukaku] and the two others in David de Gea and Paul Pogba who, in my opinion, I think De Gea’s thinking the exact same as Pogba – ‘get me out of here’,” Hilsop said as quoted by the Express.

De Gea has been linked with a move away from United pretty much ever summer since the famous fax machine that prevented his transfer to Real Madrid. The Spaniard’s exit , however,  seems closer with just one year left on his current deal and a contract extension not yet agreed.

De Gea has been an excellent servant for Man Utd and manager Ole Gunnar Solskjaer will be desperate to see him stay, despite his dip in form towards the end of last season.

Hilsop goes on to suggest United are currently in a state of disarray with star players ready to leave the club.

“I just don’t see how things get any better.

“Then that makes attracting players a whole lot more difficult.

“When your world class talent is kicking down the exit door, you don’t have Champions League football to attract anybody, how does this play out in the long term for Manchester United.”

United should not keep any player who does not wish to stay and invest in alternatives if it is indeed true that these star players will all leave.

In positive news, United are set to announce their second signing of the summer. Aaron Wan-Bissaka is expected to join from Crystal Palace in a deal worth £50m (BBC).