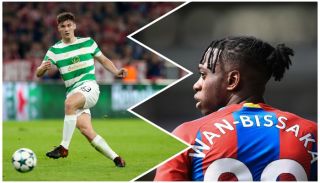 Celtic full-back Kieran Tierney is being linked to Arsenal and Chris Sutton is adamant that he’s worth as much as Manchester United are paying for Aaron Wan-Bissaka.

According to Manchester Evening News reporter Samuel Luckhurst, United will pay £45m for the Crystal Palace defender, with £5m in add-ons.

Reds hope AWB is proves to be a more successful signing than the last player the Red Devils transferred from The Eagles. Wilfried Zaha joined the club as Sir Alex Ferguson’s final signing and received few opportunities under David Moyes before returning to Selhurst Park.

Thankfully for Zaha’s career, he’s turned things around and is now seen as one of the Premier League big hitters, albeit for a lower table side.

Tierney is another player with previous United links. There has been speculation in the past linking the Scotland international with a move to Old Trafford, but Stretty News sources understand he is happy at Celtic Park representing his boyhood club.

It becomes a different story if Celtic decide it’s time to cash in on their academy graduate. Like Wan-Bissaka, he is now considered hot property and is on the radar of many Premier League clubs.

Sutton believes Tierney deserves a transfer fee like Wan-Bissaka, but teams will feel they can play their cards right by negotiating with the SPL champions. It sounds like a warning to Celtic not to get fleeced if such a situation occurs.

Not so long ago John Stones went for £50 million and Celtic sold Virgil Van Dijk for £13 million… Wan Bissaka £50 million to United…Let’s hope if Celtic do sell Kieran Tierney they get a similar fee as he is every bit as good..

Now that Premier League clubs are less reliant on transfer fees to operate, they can afford to be more stubborn in negotiations.