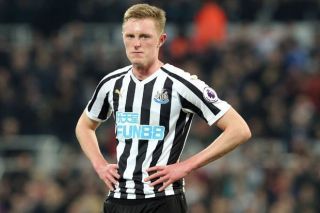 A deal for Wan-Bissaka is finally set to be completed after BBC Sport reported earlier today that a £50m fee for the right-back has been agreed between Crystal Palace and the Reds.

Wan-Bissaka will arrive at United’s AON training complex imminently before jetting off on holiday following his England U21 sides’ exit from the European Championships in Italy.

According to the Evening Standard, United are now convinced they can sign Sean Longstaff to add to their midfield options.

Longstaff, 21, has been repeatedly linked with the Reds all summer, but denied he was ready to leave St James Park for Old Trafford in a recent interview.

“I’m massively flattered to have my name even mentioned in those conversations, but I’m 100 per cent focused on Newcastle,” Longstaff told Newcastle’s TV channel as quoted by the Evening Standard.

“I’ve always wanted to play for Newcastle and I’ve only had a little taste of that so for me, it’s about getting fit as soon as I can and getting back on the pitch for Newcastle and making more memories of the future.”

But the report claims that United are readying a bid for the youngster and that they are confident of getting a £25m deal over the line.

Ole Gunnar Solskjaer is said to have watched Longstaff extensively and thinks he has uncovered a potential star in the Englishman.

Longstaff is clearly a talented prospect that fits in with Solksjaer’s strategy of blooding British, talented players in his first-team squad. However, if Longstaff is brought in, we should also go for another established name such as Bruno Fernandes to provide more strength in depth to the midfield.