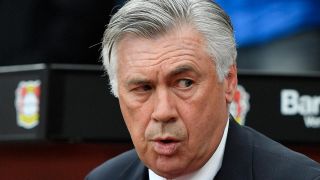 Carlo Ancelotti has jokingly threatened to quit Napoli if they sell defender Kalidou Koulibaly, according to reports.

The story comes from Italian outlet Calcio Mercato with the highly respected manager joking that Napoli may find themselves in a situation, although it’s not as if they’ve ever appeared willing to lose their most prized asset.

Context is important here and Ancelotti sounds like he’s joking rather than being serious, saying: “If there is no Kalidou, I will not even come back from Canada.”

NEXT: Agent due in London for talks with Man Utd over £70m-rated transfer target

United have shown interest in Koulibaly previously and the club is still linked with a move for the Senegal international. He would be a vast improvement on all defenders currently at the club and fans are becoming impatient waiting for the Red Devils to strike a deal for a world-class centre-back.

We can’t go into another season without sorting out the awful defence at hand. Victor Lindelof looks like he has the ability to be a good defender but that would be further enhanced if he had a better defensive partner.

And, signing Koulibaly will be a big ask this summer.

The thoughts of Phil Jones or Chris Smalling starting games next season is probably enough to turn a few people against renewing their season tickets.

Liverpool have built on something – winning the Champions League – by addressing their defensive issues. There’s no denying that has had a big influence on Liverpool’s vast improvement over the last 2 years and we should definitely take note.