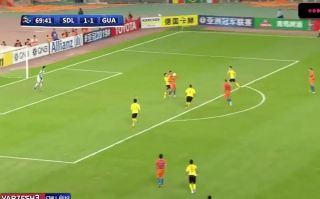 He whom we shall never forget!

Marouane Fellaini led Shandong Luneng were eliminated from the Asian Champions League on Tuesday with a 6-5 penalty shootout defeat at the hands of Guangzhou Evergrande.

The former Manchester United midfielder scored a classic Fellaini goal to give his side a late lead, only former Paulinho to equalise later again to force extra-time and penalties.

But it’s the goal itself that we’re focusing on.

If ever there was a goal scored by Fellaini, this is it…

The attack starts in a deep midfield position with Fellaini fed a terrible long ball. The Belgium international does brilliantly to control the ball with his chest to turn while spinning and finishing his attempt on goal.

It wasn’t enough for put Shandong through to the next round, but we’ve seen Fellaini do this many a time. José Mourinho would bring him on at the games to do precisely what he can be seen doing in the view below.