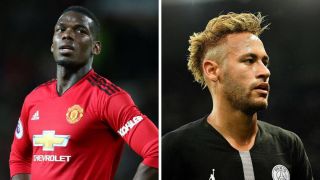 This is one the craziest transfer stories this summer.

According to the Miguel Delaney of the Independent, Manchester United have rejected the chance to sign PSG superstar Neymar in a swap deal for want-away midfielder Paul Pogba.

The report claims that both stars are desperately looking for a move away from their respective clubs this summer,  and that the French champions explored the possibility of a straight swap with the Reds for the pair.

NEXT:Solskjaer set to hold talks with defender ready to fight for first-team place

Neymar is said to earn up to a staggering £900,000 per week, double even what Alexis Sanchez is currently on, which is putting United off a move for the Brazilian.

Ed Woodward is also keen on keeping star man Paul Pogba at the club next season despite his apparent desire to leave to seek ‘new challenges’.

You would think Woodward would be licking his lips at the prospect of signing Neymar who is a global superstar and is one of the most commercially attractive players in world football, but United’s executive vice-chairman appears to have acted sensibly on this one.

The report claims Neymar is still likely to end up at Barcelona this summer if he does leave Paris this summer. Meanwhile, it is unclear whether Pogba’s future remains at Old Trafford as it looks like United are giving their best efforts to keep the World-cup winner.