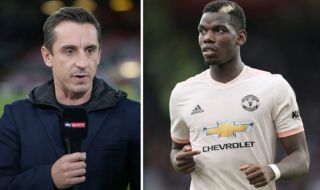 Gary Neville doesn’t think Manchester United should hold on to Paul Pogba if the midfielder wishes to leave Old Trafford.

Pogba recently stated that he would like a “new challenge somewhere else” which immediately gave the impression he’s had enough of Manchester again and wants to move somewhere else.

The last time he did that – for Juventus – he returned for a club record transfer but has since failed to meet dizzy expectations. Many pundits and fans have accused the Frenchman of worrying too much about his image on social media than improving himself on the pitch.

After winning the World Cup a year ago, Pogba endured a difficult season as tensions grew with José Mourinho, who stripped the midfielder of his vice-captaincy role before being sacked in December.

Now, Pogba is very much under Ole Gunnar Solskjaer’s wing, but that doesn’t seem to be enough to keep him at the club beyond this summer.

While Nev admitted Pogba makes United a better team, which nobody can disagree with, he said everybody needs to be focused on the club’s future in order to make progress and to be successful.

Solskjaer cannot afford to have passengers in his United side.

“Ultimately, that’s the first thing Ole had to do – to work out who was going to be ready for the club moving forward. I’m still unsure on many players.

“I see the speculation on Sky Sports News and online and it looks like it could be moving all the time. You’ve got to get players in before you let them go because being armed with the money makes you vulnerable.

“For United, it’s all about timing and manipulating and manoeuvring to a point where they know they’re going to get players in before letting some go. Otherwise they become very easy to target in terms of people bumping the money up, which I’m sure they are already.”

While many are of the view that United will struggle to attract top players after failing to secure Champions League football, Nev sees the positive side of United dropping out of Europe’s biggest competition at the moment in time.

“I’d like to think players would see beyond that in terms of what this club can do and how big it is and what it will do in the future.

“If a player is going to choose a club based on the fact they’re not in the Champions League for one season, I would say they’re not the right player for the club. You want players to come to United to put the club back where it belongs, which is at the very top.”

Another Gary Neville would be nice!