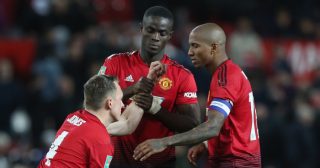 Duncan Castles has claimed that Arsenal have approached Manchester United defender Eric Bailly over the possibility over a move to the Emirates.

Bailly has been hit by injuries so far in his time at Old Trafford, and has struggled to cement a regular first-team place since joining from Villarreal for £30m (BBC Sport) three years ago.

And now Premier League rivals are set to make a move for the 25-year-old Ivorian, Castles revealed on his Transfer Window Podcast.

“I know that [Arsenal] have a longstanding interest in Eric Bailly and have approached him to find out if he’d be interested in moving to Arsenal,” he said as quoted by the Daily Star.

However, Castles questioned whether the North-London club could afford Bailly on their shoestring transfer budget.

“the question mark in that deal has been would they have the money to give Manchester United back what they paid to sign him three seasons ago?

“That essentially came down to whether they qualified for the Champions League or not, and when they didn’t, it doesn’t look like they’re gonna have the resources to get Bailly out.

“And Bailly himself has been told that Solskjaer doesn’t want to sell him.”

It would be surprising to see Bailly leave this summer and there are definitely centre-backs that should be ahead in the queue for the Old Trafford exit door this summer.

It seems unlikely Solskjaer would sell his defender to a direct rival, and surely Phil Jones or Chris Smalling should be sold on before the Ivorian.