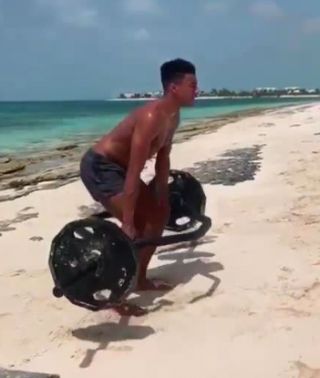 Lingard was lambasted by many in the media in recent days, following his controversial snapchat post where he was seen boasting about his luxury vacation in Miami with teammate Marcus Rashford.

Ian Holloway even went as far as to say Lingard should be ‘transfer listed’ for disrespecting his club in the post.

Manager Ole Gunnar Solskjaer was angry with Lingard over the post, and has already had concerns about the way some United stars are using social media.

It now seems that Lingard is getting his head down and getting into shape ahead of the new season.

The 26-year-old has his critics amongst the United fan base and fans will quickly get on his back again next season if he fails to perform in the opening games, after a poor end to last campaign.

Lingard will need to hit the ground running and now faces competition from new signing Daniel James to get into Solskjaer’s starting eleven.

United players are expected to report back or pre-season training on July 1st. The Reds face Perth Glory and Leeds United in their summer tour of Australia in the coming weeks.