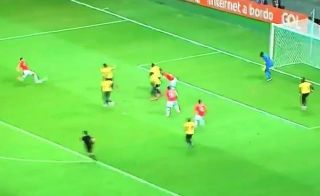 Alexis Sanchez scored another goal for Chile at the Copa America on Saturday morning.

The 30-year-old manged just two goals and four assists in 27 appearances for the Red Devils last season, yet he’s scored as many goals in this summer’s tournament for his country.

It seems playing for Chile is bringing the best out of Sanchez – but why can’t he replicate it for United?

If he remains at United this summer, which I doubt unless nobody offers to pay him a ridiculous wage again, we can only hope he brings his form from the international stage.

As seen in the video below, Sanchez finished brilliantly in the 51st minute to put Chile back in front against Ecuador. They’ve now booked their spot in the next stage after winning their first two group games.

What a lovely finish from Alexis Sanchez #CopaAmerica pic.twitter.com/pVi0HTDImq

Sanchez also got his name on the scoresheet in their Copa America opener against Japan.

It’s reassuring to see Sanchez back on his feet scoring goals, but the Premier League is a different stage altogether. The best thing we can hope for Sanchez from a good Copa America is more interest in his signature. Let someone else deal with him because Ole Gunnar Solskjaer has enough on his plate next season.