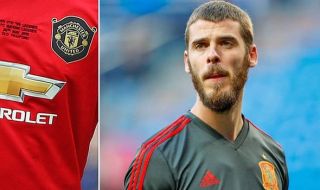 Manchester United are reportedly ready to offer David de Gea £350,000-a-week in a bid to keep the Spanish goalkeeper at Old Trafford.

The Red Devils have fought off interest in De Gea for years and look prepared to do it all again, with just a year remaining on his current deal.

NEXT: Chile boss hits out at Man Utd over Alexis Sanchez form

According to The Sun, the deal with be for four-years until 2023 with the option for the club to extend it by a further year.

It is stated that United had previously offered De Gea £300,000, but the keeper’s agent Jorge Mendes felt his client deserved a fee closer to the amount Alexis Sanchez is paid every week.

The report importantly adds that United are confident De Gea will agree to fresh terms.

De Gea didn’t have the greatest season last term but United fans will stand by their No.1 like they did when everyone wrote him off at the very beginning.

He then went on to become one of the best goalkeepers in the world.

So, if you can’t support us when we’re sh*t, don’t bother supporting us when things get better.