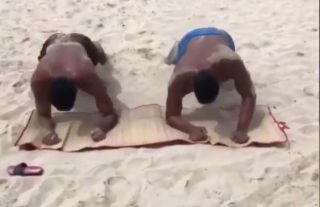 A video has emerged online of Anthony Martial going through his paces and preparing for the new football season.

The French attacker has stalled in his development over the past year or two, so it’s important he gets back on track after signing a new deal with the club.

Martial’s form dropped significantly towards the end of the last season – immediately after putting pen to paper and committing his long-term future to the club – which has left a sour taste in many people’s mouth.

He turns 24 this year and we’re expecting a big season from Martial without any excuses.

It’s a good sign that Martial is putting the work in during the off-season though. All United players should be, especially after the season we just had and apparently Solskajer has already warned them about the condition they’re in on return from the summer break.

See the video of Martial’s training footage over the summer below.