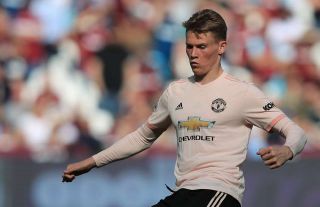 Scott McTominay has been speaking to Man Utd’s official website ahead of his third pre-season tour at the club.

“It’ll be good to be together as a group and if a few signings come in we’ll be ready for that and welcome them with open arms.” McTominay told United’s monthly magazine Insider United, as quoted by ManUtd.com.

At this stage, Daniel James is the only new signing and Solskjaer will be hoping more business gets done before the start of the pre-season tour of Australia which kicks off on the 13th of July against Perth Glory. Aaron Wan-Bissaka is a player that is heavily linked with United, though a deal has still yet to be agreed for the Crystal Palace full-back.

Meanwhile, McTominay, 22, is excited about facing tough opposition this summer.

“You need to play the best teams to get a feel for how you’re getting on as a group and how everything is going with the different systems you play,”

“But more importantly, when you play against the bigger teams, I think that really helps with your match fitness. So, it’s a positive for us that we’re playing some real top-quality sides.” McTominay added.

United take part in the International Champions Cup this summer, taking on Inter Milan, Tottenham Hotspur and AC Milan. The Reds will also play old rivals Leeds United in Perth on the 17th of July during their tour of Australia.

The Scottish international will have a big role to play for United next season, and is likely to get lots of game time given the impending departure of Ander Herrera and rumours over a Paul Pogba exit. McTominay has the confidence and composure to step up under pressure but must be complimented with at least one midfield signing who has the ability to create and score goals.