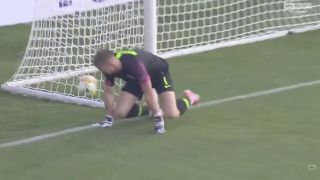 Manchester United goalkeeper Dean Henderson had a moment to forget for England this evening, which handed Romania the lead in their 4-2 win over the Three Lions at the U21 Euros.

Having been spoken about highly all summer as the potential successor to David de Gea as United’s no.1, Henderson had a blunder with this moment, as he let a 30-yard effort slip through his hands.

England are now out of the tournament.

But fear not – all footballers make mistakes. People just tend to lose their cool more when it’s the goalkeeper because then it usually results in a goal for the opposition.

England U21 boss Aidy Boothroyd has defended his goalkeeper after his mistake against Romania, as quoted by the Manchester Evening News: “Dean’s mistake, it was a mistake. The outfield players made mistakes, we all make mistakes.

“It’s a case of making sure we get round him and he knows how important he is to us.”

It will hurt Henderson more because it contributed to England crashing out of the tournament, but he needs to look at the bigger picture. These young lads must now go and learn from their mistakes to become better players, and not all will make it as senior internationals.

But Henderson has a bright future ahead of him and will spend next season on loan at Sheffield United. That’s where he was last season to help them gain promotion to the Premier League, so it was only right of the Red Devils to allow him gain top-flight experience knowing he will definitely be first choice between the posts.

Check out Henderson’s blunder below.

Dean Henderson has made a howler here to all but give Romania the win!

Just the third goal in the space of five minutes…

United fans came out in numbers afterwards and backed their goalkeeper via Twitter.

Goalkeepers make mistakes and people lose their shit. It’s when it happens again and again that questions are asked. Head up @deanhenderson, big season and future ahead of you! 💪🏻🔴

I’ll back Dean Henderson, The last thing he wants is his confidence destroyed by the press, media and some United fans, Don’t forget that he’s still a young keeper as well

Dean Henderson making mistakes in the England U21’s game against Romania just so that the Aaron Wan-Bissaka deal can get done sooner. #MyGoalkeeper.