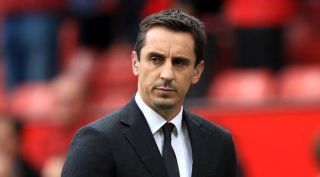 Gary Neville has been asked about Manchester United winning the Premier League next season.

The former club captain got straight to it with his answer, stating that United have no chance of winning the league for the next two seasons.

“There has to be a lot of change here. With the exchange of some players it is not done,” Neville told Bild, as quoted by Manchester Evening News.

“It will not be possible for United to become a champion for the next two years.”

Never has there been a United side I’ve felt so disconnected with. Worse teams in the past had a lot more character and fight, whereas this group contains too many individuals looking for an easy ride. Almost stealing a career.

And, I believe that’s a mentality that came into the dressing room when so many old reliable heads left with or shortly after Sir Alex Ferguson. It’s going to be a mountain climb to get back where we believe United belong and the pressure is on Ole Gunnar Solskjaer.

Liverpool were excellent last season so you can expect them to go for the title again next season, while Man City will be trying to win it for a third consecutive year. Chelsea can’t strengthen over the summer with their transfer ban and Arsenal hardly spend, but it will be interesting to see if Spurs can stick to the top two of last season again.

And – where will United squeeze in?