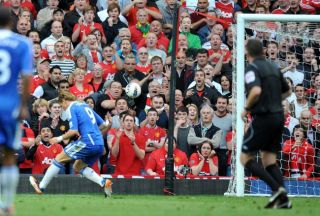 Oh Fernando, all set for retirement following today’s announcement. We’ll see you off with a nice little reminder!

He was quality and played for the Scousers. Not a good mix but when his form began to drop it suddenly went into free fall mode.

Liverpool spotted that and robbed Chelsea for his signature. After watching Torres trying to replicate what he once did for Atletico Madrid and the Merseyside club, it was like he was trying to learn a new language and really struggling to do so.

NEXT: One year a Red: Opinion on Fred’s first year at Man Utd

Then it gets better. The worst miss in Premier League history by some stretch happens at Old Trafford, right in front of the Stretford End. Torres floored in disbelief. How the f**k did he miss that?

I couldn’t sit here today reading about his career and not mention THAT miss. It was that bad and his retirement, as reported by the Guardian, is too good an opportunity to miss out on.

With Chelsea 3-1 down, the former Spain international missed a very good chance but it was for a player of his class that made it even more embarrassing.

Torres dances his way around David de Gea and then, with the goal wide open, sent his left-foot shot wide.