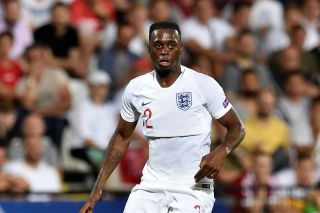 Reports broke out yesterday that a deal for Aaron Wan-Bissaka to join Manchester United was all but complete.

GQ Magazine reported that an initial £47m fee plus an additional £8m in add-ons had been agreed between Crystal Palace and the Reds, with the England u21 international set to earn £80,000 a week.

However, according to trusted BBC Sport journalist Simon Stone, a deal for the right-back is ‘not really close’.

This news will be of concern to fans, and there should be no reason United can not wrap up what seems like an inevitable deal much sooner.

Wan-Bissaka will be an excellent signing for the Reds if a deal is eventually agreed, offering pace in attack and much needed stability in defence. But this is yet another sign that United are not being efficient in their transfer business. Daniel James is only player to move to Old Trafford this summer, yet the club still require additions in areas such as central defence and midfield.

Let’s hope we can get this deal wrapped up sooner rather than later and push on for other targets in what has been a slow start to United’s summer rebuild under Ole Gunnar Solskjaer.

On Wan-Bissaka, fluid situation and can change quickly but was told earlier deal not really close.