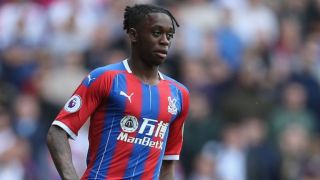 Manchester United are on the brink of signing Crystal Palace defender Aaron Wan-Bissaka.

Andy Mitten of GQ Magazine has reported that a fee of £47m plus an additional £8m in add-ons has been agreed, with the England u21 international set to earn around £80,000 per-week.

Wan-Bissaka, 21, will become United’s second signing of the summer following the transfer of Daniel James.

The Crystal Palace defender represents the ideal sort of signing Ole Gunnar Solskjaer was looking for this summer – young, homegrown talent. He will offer the Reds stability in defence which has been lacking in recent years with Ashley Young and Antonio Valencia.

Wan-Bissaka is one of the most talented young defenders across Europe and will hopefully star for the Reds for years to come.

Many United fans online have shared their excitement over the news of this deal being close. Check out some tweets below:

I'm really happy that we're getting Aaron Wan-Bissaka, Finally, No more Young in the team next season, That's why I'm happy to be honest

Wan-Bissaka could definitely become as good as Van Dijk one day, defensively that is. Wether or not that’ll happen at United, I don’t know.

Aaron Wan-Bissaka made 84 interceptions in the Premier League last season, more than any other U23 player in Europe's top five leagues.

Wan-Bissaka seems like a promising player, but we already have Dalot at RB. Wouldn't it have been better to sign an older/experienced RB and give Dalot a chance to develop? Surely there are more urgent areas that need players. CB, RM, RW? #MUFC

RB position is secured for the next decade.

Much needed. Its a big fee, but hes got good potential and will be an immediate upgrade on what we have. Nice to finally sort out a problem position.