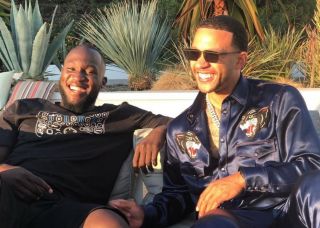 The striker is being heavily linked with a move to Inter Milan, as per The Mirror, and he’s sure to ask Memphis about life after United.

Lukaku captioned his picture with Memphis with the following message: “Small circle, I ain’t never really ‘round squares.”

That, of course, is different nowadays. Before it was rare for a player to leave Old Trafford and go on to better things. Memphis is back playing his best football in Lyon while United continue to struggle after Sir Alex Ferguson’s retirement in 2013.

Both players are enjoying their holidays before getting back on the pitch. While neither are expected to ply in the Premier League next season, unless something drastic happens, it all kicks off again in just six weeks.