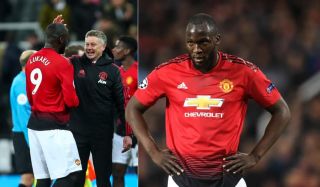 Romelu Lukaku has reportedly agreed a deal worth £180,000-a-week to join Serie A giants Inter Milan.

That’s according to The Sun, who also reveal the Red Devils are considering a move for Bournemouth’s £50m-rated forward David Brooks.

Lukaku lost his place at United to Marcus Rashford and has been strongly linked with a move to Inter since the 2018/19 season ended.

It would come as no surprise if Lukaku did leave United.

His likely departure has been backed by Belgium national team coach Roberto Martinez, who says the striker needs to find the right club, as per BBC Sport.

Meanwhile, Brooks had an impressive debut season for the Cherries last term and there has been a lot of talk about him joining one of the bigger Premier League clubs as a result.

Eddie Howe will do all he can to keep the Welsh star at Bournemouth, but he might like the idea of linking up with international team-mate Daniel James, who has just completed his move to United from Swansea City.

So, Lukaku out – Brooks in. How does that sound, Reds?