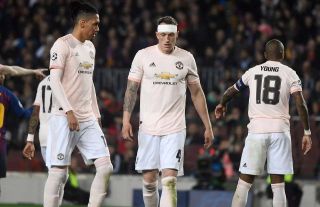 What is the world coming to?

In controversial style over the past year, Manchester United have rewarded Ashley Young, Chris Smalling and Phil Jones new contracts.

As expected, it hasn’t gone down well with the majority of fans, but that doesn’t excuse anyone from starting an online petition to ‘remove’ all three from the club – hoping to get 7,500 signatures.

NEXT: Fee agreed: Man Utd close in on Wan-Bissaka signing, could prevent fellow Palace star from getting summer move

We have mocked other clubs and their fans for petitions in the past, including a request by Liverpool supporters to have Sergio Ramos punished for ‘intentionally hurting Mohamed Salah’ in the 2018 Champions League final defeat to Real Madrid.

Salah was forced off with a shoulder injury as the Scousers lost 3-1, thanks to some brilliance from substitute Gareth Bale.

I can agree with anyone wanting rid of the three United defenders in question, but to go and set up a petition is just childish, knowing it will make little difference to the business conducted by the club.

Why all of a sudden do you think Ed Woodward and Glazers care about what you think?

The change.org petition, titled ‘Petition to remove Ashley Young, Phil Jones & Chris Smalling from Manchester United’, read: “There are players in our first team squad who wouldn’t even be good enough to be on the bench for our rivals.

“Pep Guardiola’s first season at Man City was deemed a failure. He then sold eight of his players who weren’t good enough and went on to win the league with a record number of points the following season.

“They would have them removed by any means necessary, even if it meant taking a financial hit.

“What did Manchester United do with those players? They offered them new, lucrative, long-term contracts for them to stay at the club.

“These contract offers came about after the sacking of Jose Mourinho, when everyone thought that the club were turning a new page.

“Who is reckless and inconsiderate enough to make these kind of decisions? This is the reason why I’m asking all United fans who care about this club to sign this petition so that at the very least we get some answers.”

While some of the questions are valid – and I’d love to put them to Woodward in an interview – whoever wrote the petition makes it sound like this is all new to them.

The ruination of Manchester United started long ago. The Glazers take a huge chunk of responsibility for it.