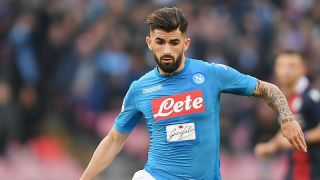 Manchester United have made contact with Napoli over right-back Elseid Hysaj, according to reports.

Sky in Italy are reporting that the Reds are keen on the Albanian international, who is capable on both sides of defence.

Hysaj, 25, has been a mainstay in Napoli’s side since following Mauricio Sarri to Naples from Empoli in 2015. Though the defender has recently expressed a desire to challenge himself in new surroundings.

“I’m absolutely ready for a new challenge because I need change. I’m not the type of person who likes to stay at a club for too long,” Hysaj told DigitAlb as per the Sun.

“I want to have new experiences, learn about a new country, meet new people, play for another team and maybe try to win something. For me, my time at Napoli is over and I hope to find a team that will give me what I need.”

NEXT:Manchester United step up pursuit of Plan B to Aaron Wan-Bissaka transfer

Hysaj has established himself as a highly competent full-back in the Serie A and it looks like he has attracted the attention of Ole Gunnar Solskjaer. United are in need of a new right-back this summer and Hysaj could be the man if the Reds do not strike a deal with Crystal Palace for England U21 international Aaaron Wan-Bissaka.

However, according to Sky Italia’s report, United will face competition from Athletico Madrid for Hysaj’s signature.

Meanwhile, Sky Sports are reporting that United are stepping up their interest in Norwich defender Max Aarons as an alternative to Wan-Bissaka. The 19-year-old suits United’s new transfer policy of signing young, homegrown talent.

The Reds should still be pushing to secure a deal for Wan-Bisakka. The 21-year-old has huge potential and has proven his capability in the Premier League already, albeit for only a season.