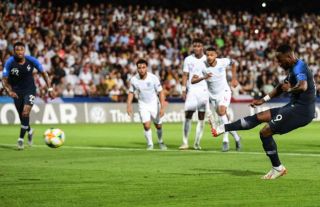 Manchester United and England goalkeeper Dean Henderson has made a fantastic penalty save in the Under 21 European Championships against France.

Henderson saved Moussa Dembele’s penalty in the first half of England’s opening game of the tournament, diving low to his left.

Lyon striker Dembele has been linked with a move to Manchester United this summer. France’s version of Goal reported last month that United were preparing an opening offer for the young striker, though there has been little update since.

Henderson’s excellent run of form continues following Sheffield United’s Premier League promotion season. It remains to be seen whether Henderson will go back out on loan to the Blades or remain at Old Trafford as an understudy.

England dramatically lost the game after France scored in the last minute of injury time, after Man Utd target Aaron Wan-Bissaka miscued high into his own net. England have games against Romania and Croatia to rectify their first defeat.

The Manchester United 'keeper saves the Lyon striker's spot-kick and it remains 0-0!