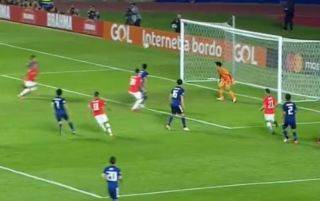 Chile began their Copa America defence in emphatic fashion with a convincing 4-0 win over tournament guests Japan on Monday.

Manchester United flop Alexis Sanchez scored one goal and created one assist against the Japanese, showing the sort of return he’s seemingly forgotten how to at club level.

You might be wondering why Japan are playing in the Copa America but so are Qatar! iNews have done an explanation piece on their invites t0 this summer’s competition.

NEXT: Hypocrisy in Alexis Sanchez apology to Man Utd fans

His future is still up in the air and United’s stance won’t change between now and the end of the transfer window. Sanchez won’t have a future at Old Trafford as long as someone has the money to take him off our hands.

It’s a shame. A great player not too long ago, who just can’t get things right in a United shirt.

Watch the video below to see Sanchez’s goalscoring header.