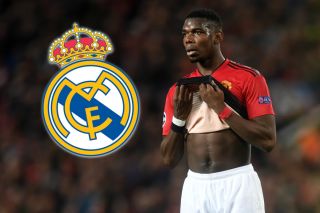 Speaking on the Transfer talk Podcast, Gibson suggests that the lure of coach Zinedine Zidane will make the proposition of Real Madrid too difficult to turn down.

“I do expect Real to sign Pogba, purely for the reason that Zidane returned to the club and was given the power he didn’t have before. The two players he has wanted from day one was Eden Hazard, who they’ve got, and Paul Pogba,” Gibson said.

Pogba is clearly unhappy at Old Trafford and was heard earlier in the week stating a desire to move away from the Red Devils to seek a new challenge.

The club should not keep a player who does not want to stay at the club and a move for Pogba is looking increasingly likely. Though Gibson added that the Reds will not let their World Cup winner go on the cheap.

“If Zidane is flirting with you to come to Real Madrid, I fear for Manchester United supporters, or those that want Pogba to stay. I think it’s inevitable, though United will put up a fight and try and get as much money as they can.”

According to the Sun, Pogba is valued by Man Utd at £150m, so a deal will only take place if Real Madrid can conjure up a world-record transfer fee. Los Blancos have already confirmed the signings of Eden Hazard and Serbian striker Luka Jovic this summer, so a move for Pogba would continue a colossal summer spend as they look to close the gap in La Liga on domestic rivals Barcelona.

If Pogba does leave this summer, it is critical United find adequate midfield replacements. Miguel Delaney of the Independent reported yesterday that the Reds are confident a move for Sporting Lisbon midfielder Bruno Fernandes will eventually be completed, despite interest from Liverpool and Tottenham.