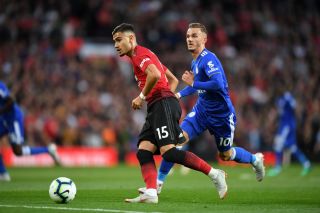 According to The Sun, the Red Devils are willing to offer midfielder Andreas Pereira in their latest move for the England centre-back.

It’s claimed that United know Foxes manager Brendan Rodgers is a big fan of Pereira and this could may now be his chance to work with the playmaker. They could do a lot worse trying to replace Youri Tielemans, although the Telegraph reports Leicester are leading the race for the £40m-rated Belgium international.

Pereira, 23, has been on the books at United since joining from PSV Eindhoven in 2011, but has only made 35 first team appearances and could see a switch to another Premier League as an opportunity to play more first-team football.

Maguire, as far as media reports are concerned, has been one of United’s top defensive targets over the past year, and it’s claimed now that Leicester want £90m for his signature.

I know what I’d tell them…

The jury is still out on Maguire. He’s done really well for a Leicester City player but this is going to be a gigantic step up and once United are back in the Champions League he will be expected to develop accordingly.

At 26, we are looking at a defender to come in and instantly do a job. Maguire has plenty of experience in the Premier League too and Ole Gunnar Solskjaer probably sees that as a big advantage.

This has me thinking… stuff Leicester and stuff Maguire. Offer Pereira to AS Monaco for Tielemans.

Youri Tielemans would be a great addition to the squad. We should be trying to sign him whether Pogba stays or goes.

He played 13 games in the PL this season while scoring 3 and assisting 4.