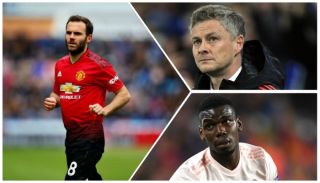 Manchester United have not given up on Juan Mata just yet. The Spain international has been offered a new deal to extend his stay at Old Trafford, as per Sky Sports, with his current deal expiring later this month.

At 31 he’s no spring chicken and doesn’t exactly fit Ole Gunnar Solskjaer’s profile of player for this squad rebuild, but that doesn’t mean Mata can’t be utilised effectively next season.

NEXT: Man Utd should offer 23-year-old midfielder in exchange for Tielemans rather than Maguire

We have no idea yet how long a contract United are willing offer. Mata had been seeking assurances of a longer contract than the one-year the Red Devils initially proposed when talks began. And, I have reason to believe that is why negotiations haven’t gone all that smoothly, which prompted speculation about Mata possibly reuniting with Unai Emery, as reported by The Express.

I’m probably not alone in thinking we were in for a better signing when Mata arrived, but he’s still been one of the most important United players of the post-Ferguson era. Considering he deserves such credit, and has been thrown into multiple roles, rarely the one that suits him best, our little Spaniard hasn’t done too bad for himself.

Perhaps by playing Mata as a no 10, scarifying Paul Pogba who I’d happily sell, Ole Gunnar Solskjaer can make further progress on rebuilding his side. We know this transition will take time so it requires patience, though we should be looking to take as many big steps possible. That way the process will seem shorter.

With Mata, though, it’s his lack of pace to play in a front three that’s the issue. If Solskjaer played with two proper centre-forwards, it would make even more sense to have Mata as a fresh stand-in playmaker, but we’re now getting into chatter about formations and stepping away from a potential suited role for the ‘greatest player in the Premier League’.

Juan Mata made his #MUFC debut 2 years ago today

Who’s the greatest player in the Premier League
It’s you Juan Juan pic.twitter.com/cjpATuJobi

For all the money United could make from selling Pogba, our midfield issues could be addressed, instead of keeping him in the middle when things could be much better.

If that means seeing Mata as a no10 where he is best and not on the f**king wing, it doesn’t sound like a bad idea to offer the former Chelsea playmaker fresh terms.