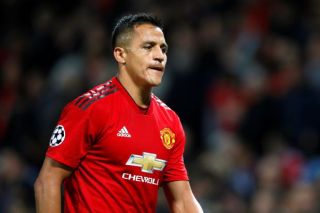 Alexis Sanchez has revealed he has never felt as bad as he did following a dire end to the season.

It was a shocker for Sanchez but collectively, for the club, it was a disaster on the pitch.

Everyone was hoping to see a rejuvenated Sanchez last season – on the back of a full pre-season tour – but he looked shot of his former self.

“For six weeks I felt worse than I ever have before,” Sanchez told reporters, as quoted by Manchester Evening News.

“I struggled in the first half as I felt stifled but in the second half I was more relaxed and played with more freedom and excitement.”

I don’t know if you can even put that down to Sanchez. He wasn’t around for much of the second half of the season, preferring to go home to Chile than Manchester for recovery. That might explain the freedom and excitement he refers to because it wasn’t evident when he took to the pitch.

However, last night was one to remember for Sanchez as he scored in Chile’s 4-0 victory over Japan in the Copa America.

Alexis Sanchez had a sensational match against Japan in the Copa America last night:

Wish he played like this for Man United. 😌🇨🇱 pic.twitter.com/h5H4B8h20v

But his days at Old Trafford are still numbered. A decent Copa America for Sanchez won’t change that.

It’s definitely time to cut our losses on the United flop.