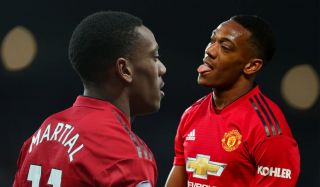 Either that or we can all just agree to laugh it off.

The Red Devils are linked with a move for West Ham defender Issa Diop, but the latest reports suggest the Hammers will only sell the player if it means Anthony Martial moves the opposite way.

According to The Independent, West Ham want Martial but United would not want to let the French forward leave.

It’s unlikely that West Ham would appeal to Martial anyway…

Martial has a lot to prove next season after a disappointing 2018/19 campaign. His form was up and down, mostly down, and he earned a bigger and better contract towards the end of the season.

The real issue with Martial last season stems with how disinterested he looked almost immediately after getting his new deal. And Ole Gunnar Solskjaer needs to address the situation with Martial as soon as possible because if it drags into next season, he could be twelve months away from West Ham being the benchmark for his standards.

Right now we laugh, but soon this could become reality for Martial.