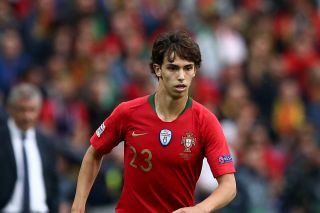 Atletico Madrid have took a major step towards beating a range of football clubs, including Manchester United, to the signing of highly-rated wonderkid Joao Felix, according to reports from Spain.

Felix has been strongly linked with a move to the Premier League, with the likes of Manchester City and Liverpool also hitting the speculation pages.

But it now looks like the Portuguese forward could be headed to Spain, with Diego Simeone’s Atletico Madrid side his next destination.

It would be the perfect response to losing Antoine Griezmann after the World Cup winner announced his intentions to leave the club earlier this summer.

Marca (H/t Daily Mirror) claim Atleti reached an agreement with Benfica to sign the teenager on Monday afternoon after matching his buy-out clause in his contract.

The Sun adds that Felix is already Madrid bound ahead of his potential move.

Spending £100m or more on a 19-year-old prospect like Felix is all well and good if the youngster has a team with solid foundations to arrive. At United, he’d almost expect to be a star instantly and I don’t think anyone is saying he is ready for that.

Ole Gunnar Solskjaer needs to start laying his foundations for the future. United are at a crossroads and it feels like we’re dipping into a bigger hole of mediocrity. The Norwegian must somehow find a way to resurrect things on the pitch.

This may still come as a blow for United, who have only been able to secure the signing of Daniel James from Swansea City.