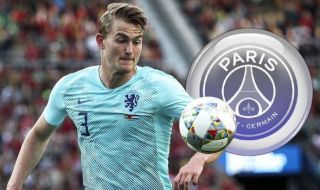 While we’ve cooled our coverage of the Matthijs de Ligt transfer saga, the Dutchman is still the focus of many Manchester United related columns.

The Daily Star suggest Paris Saint-Germain are best placed to sign the central defender because of their superior financial situation, while the player is keen to play in the top European club competition, and the Europa League doesn’t count.

NEXT: Mata on brink of agreeing new Man Utd deal, people close to player 90% certain agreement will be reached

Missing out on Champions League football was always going to hurt United at some stage. Now, it looks like one of the main reasons they will miss out on De Ligt, arguably the best young defender in world football.

United flop Kleberson has urged the Red Devils to step up their interest in the Ajax skipper.

“In my opinion Manchester United need to bring in Matthijs De Ligt, who would be a good player to join because of his style of play,” Kleberson said speaking on behalf of betoclock.com.

“With his passing, he is very comfortable on the ball and he reads the game well. Manchester United need a solid defender at the back to be able to create more chances going forward.”

You rarely get Kleberson’s thoughts on United so it makes for interesting reading to see him talk up a player — non-Brazilian — potentially moving to Old Trafford.

Everyone expected more from Kleberson at United, especially coming after winning the World Cup with Brazil in 2002. The Brazilian Roy Keane.

It didn’t work out and we’ve yet to make one successful Brazilian signing. Maybe Fred will crack out of his shell and come good, but I have my doubts and the jury’s patience is wearing thin.

De Ligt’s future will continue to drag on, but it’s looking like he will be a PSG player next season.