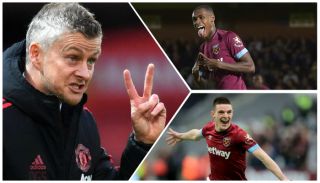 According to The Mirror, West Ham are determined to keep Issa Diop this summer, despite reported interest from Old Trafford.

The centre-back made 33 appearances for the Hammers last season and the Reds are said to be chasing his signature on the back of those performances, with an offer worth £45m.

It is noted that United are still keen on moving for Leicester City’s Harry Maguire, with Diop seen as a back-up option.

But if the money is there, in Ole Gunnar Solskjaer’s transfer kitty, why doesn’t he sign two centre-backs this summer – granted funds are left over?

We still need to sell players this summer, some of which are on ridiculous deals at the club that they wouldn’t get elsewhere so it will be difficult to shift them on.

If United were to sign one young player from West Ham and I had a choice it would be Declan Rice. Good enough to play at centre-back if needed and was excellent in central midfield last season.

Back in May, The Express reported that United were targeting the young England international.

We’d be bolstering two areas by signing a centre-back and Rice.