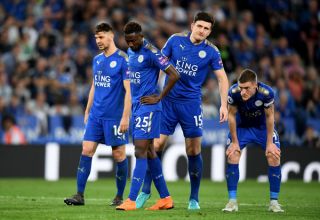 Leicester City midfielder Wilfred Ndidi admits to being ‘flattered’ by the gossip columns linking him with a summer move to Manchester United.

The Red Devils will lose Ander Herrera due to an expiring contract this summer and Ole Gunnar Solskjaer needs to make sure his side is stronger next term.

Signing one midfielder won’t be enough for United though. We haven’t had a midfield to be happy about in years and that must change if we want to get back to the top of English football again.

A bit of grit, technical ability and tons of creativity. Solskjaer should be looking to build a midfield that will grab games by the scruff of their necks.

“I am flattered when hearing such a thing,” Ndidi told Goal.

“It is very good to hear about that interest from big clubs, but there is nothing on the ground so I won’t care about it.

“I am focusing on AFCON with Nigeria now, and then pre-season with Leicester City. We have a great manger with ambition to compete wuth big clubs in the Premier League.”

The Foxes made Brendan Rodgers their manager towards the end of the season and they’ve high hopes for the future.

Although with United reportedly trying to secure a deal for Harry Maguire, valued £80m by Leicester City, it’s unlikely that they would sell two star players to United this summer.

Rodgers wouldn’t allow it – and how could he if Leicester are planning to compete with the big boys in the top-flight. Their aim is to break into the Premier League’s top six.