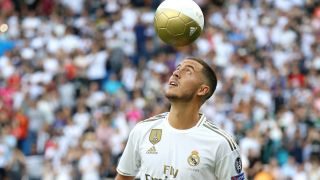 Devastating scenes for Chelsea fans as Eden Hazard was unveiled to the Real Madrid faithful on Thursday.

The Belgium international even welcomed the prospect of Manchester United star Paul Pogba joining him at the Bernabeu.

This is all part of Zinedine Zidane’s rebuild at Real Madrid, with deals already completed for the following signings: Hazard, Luka Jovic, Eder Militao and Ferland Mendy.

The Spanish giants are expected to conduct more business before the transfer window shuts as they look to bridge the gap between them and Barcelona, as well as getting back to the top of European football.

Hazard was asked directly about the likes of Pogba and Kylian Mbappe signing for Real Madrid next. He replied, as per The Sun: “I want to play with the best, and those you mention are the best. But it’s not for me to say about transfers.”

Too late, Eden. You answered the question before pretending you wouldn’t answer a question of that nature.

Talk about a spoofer!

According to The Express, United won’t sell Pogba for anything less than £150m, so it will require a mega-money deal to prize the Frenchman away from Old Trafford.

On the plus side, Chelsea will be weaker without their talisman next season. Pogba’s future is up in the air.